Artwork by Breanna Glasson (An accompanying prayer, by Michelene Glasson may be found here:

This picture was discovered by Miss Taylor, of the Auroran Filianic Tradition, and posted on her tumblr account:  https://praisestoaurora.tumblr.com/.

For Deani/Filiani, this painting is breathtaking in its significance. Though the artist is apparently Morman, for those of us who are Deani/Filiani, it clearly portrays the Celestial Mother and the Holy Daughter with the Sacred Star of the Daughter’s Nativity shining in the background. The star in the painting is the North Star.

For the Janite and Lucienne Traditions, the North Star is the Sacred Star of the Nativity of the Holy Daughter. It is the Symbol of Winter and one of the Five main Symbols of our Holy Mysteries. Wed., in the Janite calendar, is named Stelladi, in honor of this Nativity Star.

Serene Mother Ghrian has recently been doing some research on the further significance of the North Star and she has discovered that it is actually a binary (Mother/Daughter) and Triple (Trinity) star. It is also known as the Lodestar (a star the leads or guides).

Interestingly enough, the North Star, also known as Stella Polaris, is in the Little Dipper or Ursa Minor (the Little Bear). This constellation has seven stars.

Other seven star constellations in the northern hemisphere are the Corona Borealis (the Northern Crown), the Big Dipper or Ursa Major, the Pleiades or Seven Sisters among others. The Northern Crown looks like a semi-circle with the stars as embedded jewels. Though much fainter and harder to spot, the Seven Sisters are one of the few constellations that can be seen  anywhere on Earth.

From Serene Mother Ghrian,  “There is also an Earthly correspondence to the heavenly Caer Arianrhod on an Island in the ocean off the West coast of Wales (comparable in symbolism to the other Celtic Mystical Isle of the West, Avalon). “

As Serene Mother Ghrian further speculated from a Deanic perspective: “it can be discerned that later The Patriarchal legend about Arianrhod scrambles the original Matriarchal mythos of Arianrhod by having a Virgin-Maiden, Arianrhod suddenly give birth [become Mother] to two sons, one heavenly/solar, and one earthly/marine, and then run off embarrassed, rejecting, abandoning, them both [to be raised by foster fathers]. However, the Starry Heavenly Constellations, and the Isle of the Sea, [both named after the Goddess Arianrhod] declare the true story. 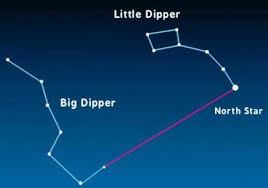 Both Her children are daughters and their mother acknowledges, protects, rears each of them.  The Big Dipper [Big Mother Bear] protects the Little Dipper [Little Daughter Bear].  The two daughters are also symbolic of the Divine Daughter, in Her two roles as Queen of Heaven and Princess of Earth.  Arianrhod is said to be a Lunar Goddess as well as a Star Goddess, and this lunar symbolism matches with the Divine Daughter’s Lunar symbolism [the Heavenly Moon regulating the Tides of the Earthly Sea].”

I used to spend night after night after night with my star chart and telescope gazing at the stars, the planets and wondering about the Cosmos. It was enthralling to learn to identify all the constellations and to be able to navigate the celestial wonders above me.

Now, I can see how important it was for the ancients to be able to paint their myths amongst the stars.

When I see the Northern Crown, I will see the Crown of Our Lady.

When I spot the Seven Sisters, I will think of the Seven Janati.

And when I look up to the North Star, Stella Polaris, I will welcome the Holy Daughter, our Guiding Light, Who is an hidden Trinity.

Thanks to ArchMatrona Ghrian of the Lady of Light Chantry and Miss Taylor of the Auroran Filianic Tradition for their contributions to this post.

May Our Lady bless you,