O, Madria Sofia, Jana of Intelligence, Intuition and Wisdom, be with us.

In this Bits and Pieces:

New posts by ArchMadria Ghrian and Madria Gwenevere; A Christian chasuble which looks remarkably Divine Feminine; and my own experience of the Veil of Illusion.

There are a couple of important new posts:

ArchMatrona Ghrian has written a post explaining the titles and personal Names of the Divine Trinity for the Lucienne Tradition which are Rose/Celestial Mother, Lily/Holy Daughter and Flo:

And, while this might not be suitable for the young due to the subject matter, Madria Gwenevere has written a post from her heart which shows how Dea can rescue us from the most dire moments in our lives. Very magickal and inspiring ending to this story. And may all those who suffer from depression, seek not only Dea’s help, but professional help, as well.

While, at times, the pre-Vatican Church might depict the Christ-child as looking very feminine, this chasuble is remarkable in that it seems to depict the Divine Mother and Daughter. Many of the angels look feminine.  Research seems to indicate that it was embroidered by Marie-Anne Leroudier. Thanks to Sorella Barbara for coming across it: 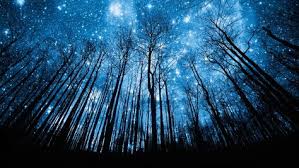 The Veil of Illusion

Last night, when I was serving the Rite of Sacrifice (RoS) shortly before the rising of the Full Evening Moon, I opened the scriptures to

Thoughts of the Mind verses 28-37. I love this passage of scripture. It reminds us that beneath the Veil of Matter, Our Lady is the Essence of the All.  At the end of the RoS, during the time of contemplation/meditation we read: Let us consider that the earthly things we see about us are but illusion, and that we could see with clearer eyes, a more glorious vision would appear before us.
And so, I was reminded how often my beautiful lake and trees, perhaps more and more, lately, seem like an illusion.
I used to play a couple of video games with my boys when they were younger and one was a very famous car racing game. You could choose from a variety of cities, each of which was faithfully reproduced. As you raced your car through the city, whether it was San Francisco, NYC or Seattle, the landscape would appear as you drove…it would appear just as you were at the spot of observation.
There are some scientific theories which believe this is true of our world, that the world only exists when it is being observed by consciousness. It is, as our religion teaches, an illusion.
Oftentimes, when I am driving my car along the road or even sitting in my yard watching the treeline across the lake, I have a very strong sense that it is all an illusion, like in that video game.
When I am sitting in my yard by the lake; when the landscape seemed less real,, when it appears to be an illusion like in the video game, it actually makes me sad. It’s such a beautiful, peaceful spot, I hate to think that it is all an illusion. That is until I read that passage near the end of the Sacrifice.  I realized that though the world around me might well be an illusion, it is only a thin veil that hides the Glories of the Real. And so, I remember that this lake, these trees are but an imperfect mirror of the Reality Above. It’s like seeing a rainbow reflected in a lake and not realizing that the real rainbow is arcing over the lake, in all its vivid magnificence.
Now, when I sit and gaze at the lake and the trees beyond, I will remember that, yes, it is an illusion as it sometimes appears to be, but if the veil of illusion was cleared away, I would see a wondrous vision, a wondrous realm….our True Home.
There are many Near Death Experience stories… where …if they are in a room or an hospital when they die, it’s like everything just opens up right there…….. the veil of the illusion of the room opens up to the glory and light beyond (or the tunnel).
And so, it is true, the veil of illusion in our world can simply open up like a curtain and reveal the Glory of the Real.
~
May Our Lady bless you.
Blessed is She.
~
A. M. Candra Sophia