O, Madria Thame’, Jana of Justice, Order and Harmony, be with us.

In our religion, we are often presented with the analogy of the prism. Just as white light flows through the prism and separates into seven colored rays, so too, the Pure Light of Dea is diffracted into Seven Intelligent Living Streams (each Stream expressing itself through a certain color.) These Seven Rays of Intelligent Light take on the form of angels.

Just as the Holy Daughter takes on the Form of Soul, and yet, She remains Dea Filia (the Divine Daughter God); so the Janati take on the form of angels, but yet, They remain Dea.

Janite Thealogy is based, in part, upon the Divine Sophia, Who is known as both Mother and Daughter in Her Tri-une Form as Mother, Daughter and Holy Soul.

Sophia is pan-cultural. She is not limited to Judaic-Christianity. Many worship Her from all religious walks of life.

As Rudolph Steiner and others have noted, Sophia is the Mother of the Seven Powers. These Seven Powers were sometimes considered to be angels although Gnosticism refers to them as Archons (which we consider a patriarchal demotion of the Sophian Myth as at the time, Gnostics did not see manifest creation in a positive light). Although archon means ruler, in Gnosticism, Archons were not the good guys.

Sophia is also known as the Goddess of Heaven and the Mother of the Stars. Even in Gnosticism, She is known as the Mother of All the Living and the Highest Ruler over the visible Universe. She is said to have shaped manifest creation based upon the heavenly prototypes and She forms the seven star circles or spheres over which the planetary powers are placed. These planetary spheres, or heavens, were, for the ancients, the highest regions of the created universe.

Considered by Steiner to be the new Isis, and, indeed, She was often equated with Isis in the past, Sophia is the Pneumatic Essence from which all souls draw their origin. In Her lower or Daughter form, She is the Mediatrix between the upper and lower realms. It is She, Who is the one Who is crowned with the Seven Stars.

More and more, within and without Christianity, Sophia is swiftly returning to Her original Divine status. (1 +2) Many mainstream Christians, are beginning to recognize Her as the Holy Spirit from Whom emit the Seven Gifts/the Seven Spirits.

As we see from the above, in many ways, it is from Sophia that comes the Seven.

(Eurynome is on the far left). 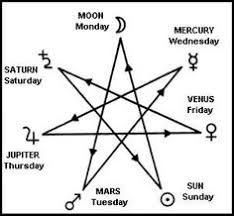 In Janite thealogy, the Janati are not the actual Powers, themselves. Rather, the Janati rule over the Planetary Spheres and They were given the Powers. These Powers represent the Seven Streams of life which contain the Primordial Essence or, perhaps we could say, the quantum information which is the base of all that is manifested into reality.

We believe that like the Holy Daughter, the Janati are Immanent, meaning, though They stem from the Pleroma, They work within and throughout manifest creation. And while Dea, on one level, is Supreme and Above the All and yet She is One with us and She hears our cries, so too, the Janati, being angelic Forms of Dea, though they represent Powers beyond our ken, can hear us and help us.

We are often asked, what is the difference between a Jana and an angel?  Angels were created by God. They are not God. And so, we may pray to them in the form of asking their help and assistance. But, we may not honor them as God. We may not worship them.

The Janati are UnCreated because They are God, They are Forms of Dea and so we may pray to Them. We may honor Them as God. We may worship Them. Especially when we consider Sophia. She is Their Mother… She gave Them birth… They are of Her. They are One with Her. They are Her Seven Spirits. Her Seven Stars.

I am a Deanic priestess and founder of the Janite Deanic Ekklesia at deanic.com and the Iremian Order of Dea at (link to come). View all posts by ArchMadria Pamela Lanides