O, Madria Candra, Jana of Reflection, Reason and Purity, be with us.

22 Ceres/Aug.1 marks the Summer festival of Cerealia. This feast is named after the ancient Roman festival which was celebrated in honor of Ceres, the Roman form of Demeter, in April.

Ceres was one of the Di Consentes or chief deities of the Roman pantheon. Known as the goddess of agriculture, grain and the love a mother bears her child , she taught the people how to grow food and make flour and bread. She was kind and benevolent and was considered to be the nurturer of the human race. There was a Roman saying that if something was ‘fit for Ceres’, it was splendid. (1).  The word cereals comes from the name, Ceres.

Like her Greek counterpart, Demeter, the sacrifice of Ceres lay in the loss of her daughter, Prosperina (Greek:Persephone) who was also titled, Kore Soteria, meaning, the Saviour Maiden. (2) The sacrificial Corn Mother or Corn Maiden is honored in North America by the First Nations. There are two main versions of her mythos. In the following version, the Corn Maiden willingly gives up her life in order to nourish humanity. She is called the First Mother:

These three myths speak of great sacrifice on the part of either the Mother or the Daughter. And each is in relation to or symbolized by corn.

Corn, unique to the Americas and is sacred. It is also sacred to the First Nations who believed it was of divine origin and it has a very important tradition here in Massachusetts. If Squanto, of the Wampanoag Tribe, did not teach the Mayflower pilgrims how to grow corn and the secret of its fertilization, who knows how they would have fared.

During the Festival of Cerealia, we bow our heads in thanksgiving for the first harvest of grains; these edible seeds used for food.

We shower gratitude upon our Holy Mother Who, in the fullness of the Sacred Season of Summer, blesses the fruitfulness of the earth with the golden grains of life. We also thank the Holy Daughter, Our Kore Soteria, the ear of corn that is reaped in silence for Her holy Sacrifice.

Celebrating with crafts and food: 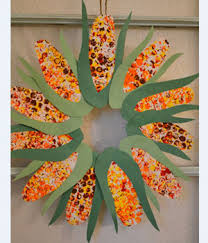 Check out all of these magnificent corn related crafts!

For the truly adventurous, you might want to try your hand at this wheat sheaf bread: https://thecakeshaker.com/2011/09/05/ready-bready-dough-make-your-own-harvest-wheat-sheaf-you-know-you-want-too/

or these delicious looking whole-grain pineapple up-side down muffins, both recipes submitted by Madrina Sophia:

And lots of other recipes including barley soup (may be made without the beef).

May Our Lady bless you and yours with abundance and joy.