O, Sai Rhea, Shield of Steadfastness, Temperance and Self-Restraint, be with us. Blessed are You.

O, Glorious Agia Theia, brightly shining One, be with us. O, Resplendent One, clothed in radiant gold, dazzling as the Sun, hear our prayer.

Illumine us with Truth and instil in us the sweetness which comes with a serene mind and a joy-filled heart. Help us to remember that joy comes from within and not from without. May we learn to nurture it in our hearts that it may overflow unto others who might be in need of the flame of cheer and comfort in their lives. And may (state request). 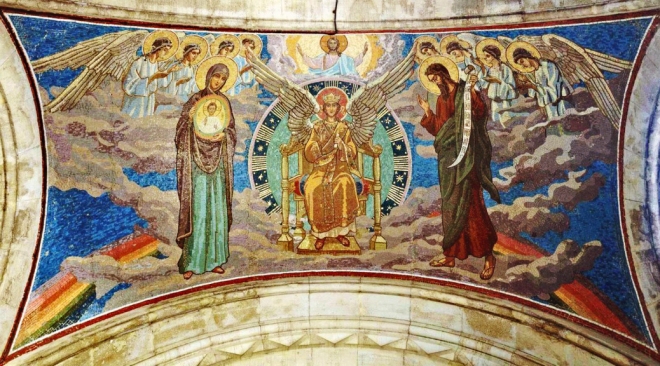 Today, as part of our series on the correlations of Divine Sophia and our Clear Recital scriptures, we are going to take a moment to discover the relationship between Sophia and the Seven Janati.

At the end of this article is a very exciting discovery, a lengthy article showing my own thealogy that the Holy Spirit is Seven-fold.

Holy Sophia is associated with the Divine Seven in different ways.  In Gnosticism, She emanates/creates the Seven Feminine Aeons;  in the book of Proverbs, She sends out her Seven Virgin Handmaidens and She has hewn out the Seven Pillars and as the Holy Spirit in Christianity, Who is more appropriately called Mother Spirit as in ancient times, She sends forth the Seven Rays of the Gifts.

In Gnosticism, Sophia is the Ruler of the Seven Planetary Powers, however, these Powers are Archons. (i.e. not the good guys) and in Gnostic cosmology, Sophia triumphs over them and becomes Ruler over the Seven Spheres.

In her book, Sophia, Goddess of Wisdom, Bride of God, author and scholar, Caitlin Matthews includes a picture of an unusual statue of Sophia made of rosewood where She is holding a seven pointed star. This sculpture based upon a vision or apparition that was experienced by the artist, Bryce Muir.  This star signifies Her overcoming of the seven planetary Archons and Her rising to become the Mother of the Ogdoad or Eighth Realm. Ms. Matthews goes on to state that “the Descents of Sophia, like the Seven-fold Descent of Inanna to the Underworld, pass through all levels of experience making Sophia a potent Companion to all souls.”

These Aeons were male and female. The Female Aeons are: Rejoicing; Blessedness; Love; Peace; Gladness; Truth and Faith. Like the Janae, these Seven Aeons are both Divine, having emanated from Holy Sophia and They are also angelic in Being.

In some (though not all) Gnostic texts, Aeons are often referred to as being androgynous. A better way to think of them is that they are ‘twin souls’.  We must remember that there are many different cosmologies in Gnosticism and various belief systems as well. While some Gnostics understood the Aeons to be androgynous, others thought of them as Primordial Ideas, while still others believed they were syzygies or ‘yoked pairs’, the latter being the Janite point of view.  They are Light Beings and are sometimes likened to angels. And so, similar to the Deanic/Filianic teachings on the Janae, they are both Divine and angelic.

In this particular text, Wisdom is personified. Wisdom, Sophia, sends out Her Handmaidens to invite everyone to Her feast of wisdom. Ms. Matthews states, that the Handmaidens are the assessors of Wisdom.

It would not be until the Middle Ages when they would be transformed into the Daughters of Sophia and an English cleric, Alcuin (735-804 AD) would associate the Seven Pillars with the Seven Liberal Arts.

As we can see, there is a correlation between each of the Seven Liberal Arts and the Janati, Themselves.

The purification of the soul, through the seven planetary experiences, was common to many cultures and traditions. (Sophia, Goddess of Wisdom and Bride of God).

The Seven Planetary Powers of Pagan Tradition become the seven gifts of the Spirit in Christianity: Wisdom, Understanding, Counsel Fortitude, Knowledge, Piety (Faith) and Fear of God (nowadays this is rendered as Awe PL)….(Sophia, Goddess of Wisdom and Bride of God).

This amazes me. I had already correlated the Seven Gifts of the Holy Spirit with the Seven Janae before I had read this.

Again, I was blown away by the following article which came to the same conclusion as did I: http://www.lasan.org/lasan-readings/english/holy-spirit/seven-holy-spirit-gifts.htm and that is, the Seven Spirits of the Holy Spirit. This article refers to the Holy Spirit as “he”, but the Holy Spirit is the Mother Spirit, Dea Madria, Mari Sophia.

The above mentioned article expertly disproves the various theories about the identity of the Seven Spirits. The author even mentions the Three-Fold Spirits of Heaven and the Four-fold Spirits of Earth…. Deanic teaching right there of the Janati!!!!

While quite lengthy, this is a remarkable article and it is highly recommended as one of  the ways of understanding the Janae. 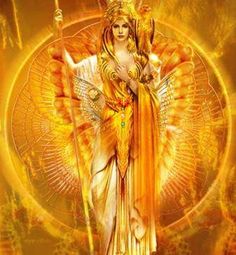 In summary,  Divine Sophia is the Ruler of the Planetary Powers; She emanates the Seven Feminine Aeons; She sends out Her Seven Handmaidens and hews out the Seven Pillars of Wisdom which have variously been identified, as Ms. Matthews explains, with the Seven Liberal Arts, the seven days of the week, the seven heavens and the Holy Spirit and finally, She is the Seven-Fold Holy Spirit, Who, as Caitlyn Matthews so beautifully depicts in her book, holds the Seven Spirits in Her lap as Doves, ready to be sent out into the world.

I would like to conclude with this prayer to the Janati by Sorella Roselyn. 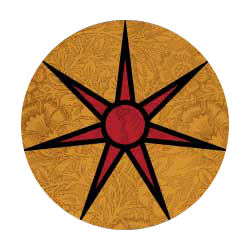 May Lady Theia fill our hearts with joy,

May Lady Candra keep us pure in spirit,

May Lady Grace enfold us in her love,

May Lady Vicka strengthen our courage,

May Lady Thame balance the scales of justice,

May Lady Sage enlighten our minds with truth,

May Lady Rhea guide us safely through the dark.

May the Seven Rays of Déa shine down upon our souls, in this world and all the worlds to come.

By the Mother, the Daughter, and the Great Mysteria,

Blessed is She.    Sorella Roselyn